She is the author of  Stepping Into Zion: Hatzaad Harishon, Black, Jews and the Remaking of Jewish Identity (University of Alabama Press 2014) and co-editor along with Michael Bernard-Donals of Jewish Rhetorics: History, Theory, Practice (Brandeis University Press 2014). She has published essays in Rhetoric Society Quarterly, College English, Journal of Communication and Religion, Computers and Composition Online, Argumentation and Advocacy, Journal of Business and Technical Communication, Technical Communication, and Oral History Review, and Journal of Jewish Identities  Along with her research collaborators Dr. Beth L. Goldstein, Dr. Douglas A. Boyd, and Sarah Dorpinghaus she established the Jewish Heritage Fund for Excellence (JHFE) Jewish Kentucky Oral History Project, a repository of 122+ oral histories for Jewish Kentuckians housed at the Louie B. Nunn Center for Oral History. In collaboration with author/illustrator JT Waldman, she is currently authoring an archives and oral-history based transmedia project America's Chosen Spirit  which includes a webcomic and podcast series that detail the influences of Jews and other minorities on the Kentucky bourbon industry.  In collaboration with students in Bourbon Oral History Spring 2021, she launched the Women in Bourbon Oral History Project. When she’s not writing or teaching, you can usually find her dancing salsa, tango, merengue, bachata, or swing or bicycling around Kentucky!

Networks of Rhetorical Action and Resistance: Fela and Chaim Perelman’s Social Sphere. This monograph argues that Chaim Perelman, his wife Fela, and their network of Belgian Resistance leaders enacted the model of rhetorical action later developed in the The New Rhetoric Project. This project is in development; I spent two summers (2009, 2010) researching archival materials related to the Perelman’s resistance to German Occupation in  Belgium and participation in the Aliyah Bet. (Prospectus in progress).

“Transdisciplinary Itexts and the Future of Web-Scale Collaboration.” With Lisa Litterio and Jim Hendler.  Journal of Business and Technical Communication. July 2011. 322-337.

“Bridging the Divide: Blogs in the Composition Classroom, ” with Tom Nelson.  Currents in Electronic Literacy.Volume 9. December 2005.

·       This project fills a gap in both scholarly and popular attention to the many women who play a key role in Kentucky’s $8.6 billion dollar bourbon industry (KDA). Advancing much needed work in diversity, equity, and inclusion, this project will document the extensive record of women who have helped shape the bourbon industry and the culture of bourbon that surrounds it. The project will include a variety of  women’s voices representing multiple perspectives (including but not limited to Black women and other women of color), and will be established in partnership with the University of Kentucky’s Louie B. Nunn Center for Oral History, the James B. Beam Institute for Kentucky Spirits, and advanced students in Bourbon Oral History.

·       This project was launched in conjunction with students enrolled in WRD 569/HIS 595 Bourbon Oral History in Spring 21 and builds upon the successful model of student research developed with the Jewish Kentucky Oral History Project. This model trains both undergraduate and graduate students in professional oral history methods while providing them with access to leading women in one of the most lucrative industries in the Commonwealth; the chance to make history each time they conduct an original interview; and opportunities to publicly present their original research.

·       To date 24 interviews have been collected; over the next 3-5 years the project aims to collect 100-150 interviews of female industry leaders.

·     This historical fiction graphic novel and transmedia project highlights the influences of Jews, women, African Americans, and immigrants on Kentucky’s iconic Bourbon industry and consists of four main components: a serial webcomic; a podcast series; a sip-and-study series, and an Omeka-based repository of curated primary materials which form the foundation and inspiriation for the historical fiction webcomic. 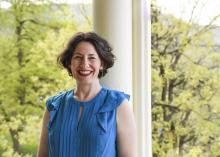